Home
>
In the News
>
REDLANDS: Fireworks show keeps getting hotter

In the past 40 years, Redlands’ annual fireworks show has gone from a last-minute, low-budget, anything-goes kind of event to one of the biggest Fourth of July pyrotechnic displays in the Inland area.

In the early days, rockets sometimes shot across the grass at the University of Redlands stadium, stationary pieces meant to fire one at a time ignited in groups, and falling embers routinely set the field and oleanders to north and east ablaze.

Things have become much more professional since those early, harum-scarum days, but there still can be surprises.

Like on July 4, 2013. The crowd had just finished exclaiming over the spectacular grand finale when a loud thump echoed through the stadium and a rocket rose up. The burst of color seemed to fill the sky. 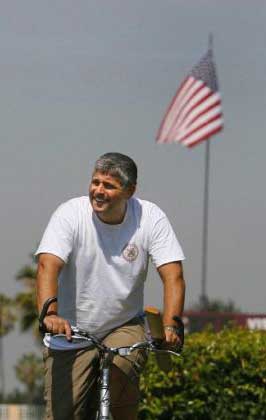 During a Redlands Forum talk Sept. 11 about the city’s annual daylong Fourth of July celebration, Jeff Martin of Pyro Spectaculars, who has been in charge of the fireworks show since 1995, and Bill McCalmon, chairman of the nonprofit Fourth of July Committee since 1977, initially feigned innocence when asked about the shell.

The finale to the grand finale was a 10-inch shell left over from a show Pyro Spectaculars had done for Casino Morongo, he said, adding that they did check with the fire marshal before setting it off.

“We didn’t want to take it back to Pyro,” Martin said. “It went off and I remember Bill saying, I think, the same thing: ‘What the heck was that?’”

Just for scale, according to the Pyro Spectaculars website, the 5- to 6-inch shells usually used in Redlands rise about 500 feet and might burst to 1,000 feet wide. A 10-inch shell rises about 1,000 feet and expands to 2,500 feet wide. It was no illusion that the colorful blast filled the sky.

McCalmon shared a few stories about fireworks displays gone awry, including the first year that narration was added to the show in 1979.

San Bernardino newspaper and radio man Chuck Palmer was called upon to read a script timed to the lighting of ground displays set up side by side in the stadium. All went well until the Battle of Concord Bridge display was ignited. It depicted soldiers shooting at each other, McCalmon said.

“Think about this. It lit off Betsy Ross, the Liberty Bell and the American flag, all at one time. Chuck just kept reading faster and faster and faster,” McCalmon said as the audience roared with laughter. “It worked, but at the end we all just went, ‘Oh, my God.’”

When McCalmon first started working on the show in 1975, the budget was about $2,000. When he became committee chairman four years later, there was $3,000 in the bank.

“We thought things were just going to be great,” he said.

Now the show has a budget of about $120,000, thanks to the San Manuel Band of Mission Indians’ sponsorship, he said. Without that, stadium tickets that cost $8 this year would go up to $12, McCalmon said.