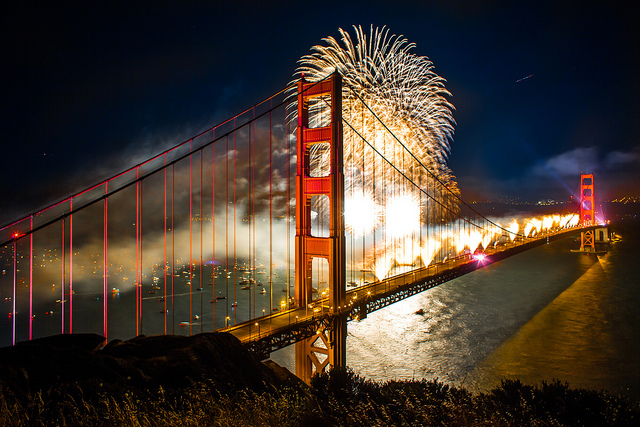 SAN FRANCISCO (KGO) — On Wednesday evening, hundreds of thousands of people will pour into San Francisco to ring in the new year — with a bang.

The city is bracing itself by preparing the fireworks and the police.

Just 15 minutes of fireworks requires days of preparation. “Somewhere in the neighborhood of 4,000 to 5,000 devices that’ll go off in a 15 minutes period of time,” one man said.

Pyro Spectaculars by Souza loads the barges just steps away from where they set up on the Fourth of July.

But while that show is about dignity and patriotism, this one’s a little different. “This is more elevation and big explosions and it’s truly just a 15 minute rage of explosives,” Pyro show producer Jeff Thomas said.

In the summer, there’s fog and in the winter it’s usually clear. “It’s amazing sometimes when you see shots on YouTube days later of where people actually saw the show from. It’s incredible how far away they can see it,” one man said.

But if you want the best view, there’s only one place. “The Embarcadero Waterfront south of the Ferry Building is where a good vantage point to see the show,” Thomas said.

With all that eye candy, the one thing you can count on out here is a big crowd. Officials are already setting up barricades and if you do plan to be out here pressed up against them in your winter coat, police have some things they’d like you to know. “We want to avoid any tragedies, so take public transportation, hire a car service, take taxis, ferries, whatever it may be, but just don’t drink and drive,” Ofc. Albie Esparza said.

Police will be on DUI patrol and writing tickets for public drinking.

The good news is there are options because BART will run until 3 a.m., Muni and Caltrain will be free.

Uber and Lyft will have extra cars on the road, though they could be expensive when demand is high.

And the taxi app Flywheel will offer a special promotion, offering $10 rides to go anywhere in the city.

“A lot of times with crowds, people are opportunistic and trying to you know steal someone’s smartphone, or purse or wallet,” Esparza said.

Police say go ahead and take pictures, especially of fireworks, just put your phone away when you’re done.