‘The sky is our canvas, and fireworks are our paint,’ says Pyro Spectacular owner James Souza. 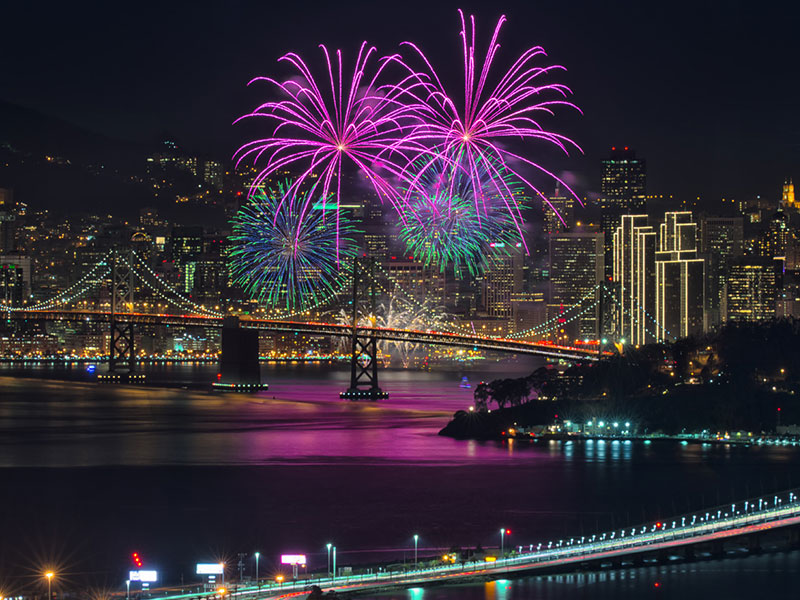 Every year on Dec. 31, Americans bundle up and brave the crowds — or put on pajamas and hunker down in front of the TV — for one reason only: the explosives that light up the night sky and mark a new year.

Installations for San Francisco’s six-figure, New Year’s Eve firework display begin at least two days in advance. All told, more than 20 people install the explosives on a barge in the Bay, all for the colorful, 15-minute display.

It’s a tradition that’s lasted more than 60 years, and behind every show is one family: the Souzas. In the early 1900s, Manuel de Souza’s penchant for colorful explosives earned him enough dough to put food on the table — and then some. A Portuguese immigrant from the Azores, he was known in San Francisco as “Papagaio.” His firework displays were accompanied by carefully curated music, and in a city that’s always loved to party, his business thrived.

Decades later, that hasn’t changed. Pyro Spectaculars is the largest firework company on the West Coast, staging more than 400 displays every July 4. Papagaio’s great grandson, James Souza, carries on the business with his two eldest sons, and they’re busy year-round handling July 4 events, openings for the Philharmonic Orchestra, local sporting events, and even travel for the Olympics. (They’ve also since dropped the quasi-aristocratic “de” from their family’s surname.)

And at this time of year, they’re focused on one night in particular: New Year’s Eve.

“There’s a lot going on behind the scenes that audience doesn’t know about,” the eldest Souza said in a Wired video earlier this year. “Our job is to make it look easy.”

It takes nearly 50 full-time employees and 2,000 licensed pyrotechnic specialists to handle the yearly load of firework requests, and months of advance planning.

“What we’re trying to do is always improve the wow factor,” Souza said. “What can we do to get the oohs and the aahs from the audience?”

With the fireworks being so large — a pyrotechnic device 10 inches in diameter will go an estimated 100 feet into the sky — they’re all ignited by computers, not by hand.

“In 1969, my father was out there firing a show by hand with a torch, doing it the way we’d done it for years and years,” Souza says. “In this case, it blew up right next to him. That caused serious injury to him and his partner, who lost his hand. In the hospital that weekend, he said, ‘From this day forward, we’re going to pioneer electric firing.’ ”

Today, there’s a high-tech software program that triggers the fireworks, and, in keeping with Papagaio’s original style, can even launch the explosives in time to music.

For those who have never made it down to Embarcadero for the fireworks, you may be surprised to hear that they’re set off to music. But that’s not the only tricky thing to coordinate; the shells are all loaded with explosives by hand, then programmed into the computer system.

Jeff Thomas, a full-time show producer for Pyro Spectaculars, with more than 3,000 displays under his belt, manages much of this. With fire safety front and center in recent years, Thomas has also become an expert in that field, working with California’s firefighters to improve their training through seminars during the company’s quieter months. In recent years, his job has been made more complicated. Drones are prevalent in the Bay Area, causing new safety concerns.

“Our company is still scratching our heads over this,” Thomas told the Chronicle last year. “We don’t understand all the parameters and restrictions of drones.”

But months of planning aside, there’s always a little stress right before the whole shebang goes off.

“The anxiety starts about three minutes before,” Souza says. “We get to the 10-second countdown, and at about four, we backtime the very first shell to go off. We can see that the computer has sent out the signal, it’s lit the fuse, it’s fired the shell into the sky, and we can see it’s going, it’s going, it’s going … and on zero: boom.”

To get a good spot for fireworks this New Year’s Eve head to Embarcadero between Mission and Folsom streets around 11 p.m. The best view can be found south of the Ferry Building, and the music that accompanies the show is best heard near Pier 14.