Check Out the Best Fireworks Shows for New Year’s Eve 2014!

Passport to a New Year on the Queen Mary

Since pulling into Long Beach Harbor in 1967, the Queen Mary’s travel days have been confined to history…until now. The eve of December 31st will relaunch the retired ocean-liner to her voyaging days with a one-night world cruise – The Ultimate New Year’s Eve Voyage. “Passengers” will be transported to the vibrant streets of India, carnival nights in Brazil, the extravagant Moulin Rouge in France and Times Square in New York before returning to the ship’s beginning, a village in Scotland. For those who’ve dreamed of celebrating the New Year abroad – now you can, without ever leaving Long Beach. 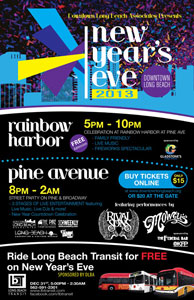 Sacramento’s best New Year’s Eve tradition lights up the skies above Old Sacramento with bright colors and flashes during the New Year’s Eve Sky Spectacular. This free celebration is open to all residents and features activities for the whole family to enjoy. Including children’s programming, live music, dinner specials, hot food and drink vendors and a variety of colorful street entertainment.

New Year’s at the Needle

Join us in the festivities at Seattle Center or tune in to KING5-TV and KEXP 90.3 FM for the largest display of fireworks in the history of the show, set to an original music soundtrack from Seattle’s own listener-supported radio station, KEXP. Live event coverage will be broadcast on KING5 from 11:35 pm to 12:30 am. KEXP will feature the music via their live broadcast from 11:59 pm to 12:08 am.