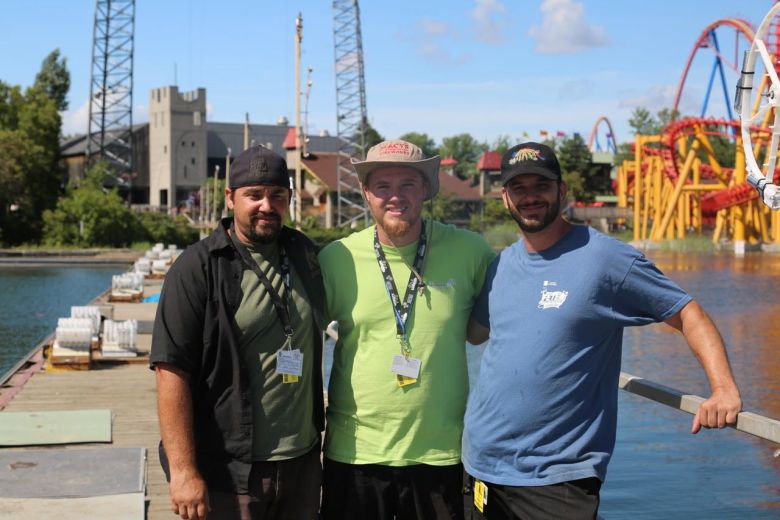 Paul Souza’s DNA is dazzling. The 42-year-old Redlands resident is a fifth-generation member of the family-run business, Pyro Spectaculars by Souza – an internationally known fireworks company. His father, Jim Souza, is CEO and president of the Rialto-based pyrotechnics company with offices on the West Coast and Hawaii.

The first company to synchronize music with aerial fireworks, according to its website, the business is one of the largest fireworks companies in the world, creating 300 shows each year in California alone.“We did the 1984 Olympic Games in Los Angeles,” said Paul, who produces California’s magical night-time wizardry. “That pushed us into the forefront of our first big fireworks shows.”

But, safety is the priority.

“Above all is our safety protocol, which is not to expose a risk element,” Paul said. The family knows the danger well. The pyrotechnic company’s American genesis began with Manuel de Souza, a Portuguese immigrant who came to San Francisco in the early 1900s with colorful fireworks expertise from “the old country.” One day, Manuel found a “dud,” a shell that hadn’t exploded, and when he went to pick it up, it went off and blew his arm off. That was more than a century ago.

Creating magic in the sky for the Hollywood Bowl and the Rose Bowl AmericaFest, as well as hundreds of Independence Day celebrations throughout the state, Pyro Spectaculars shows are dazzling, with exploding lights that seem to dance with the music. Their biggest Fourth of July show is the Macy’s Fireworks Spectacular, shot from barges in the Hudson River in New York City, Paul said.

In all, Jim Souza has three sons. In addition to Paul, are Christopher who runs the Macy’s show, and Ricky, the youngest, who just graduated from Notre Dame University and is helping Christopher set up the Macy’s July Fourth extravaganza. “We work hard syncing the music – it’s hard work,” Paul said. “We craft together a full entertainment package by setting the fireworks to music.”

Events have included Super Bowl games, World Cup and World Series games, the grand opening of “Hamilton,” and the 75th anniversary of the Golden Gate Bridge. “We try to feature every culture in our shows. All cultures use fireworks to express themselves,” Paul said, adding that “we are a melting pot and back in the day our fireworks were mom and pop culture, tied to church festivals.”

The business grew when Pyro Spectaculars helped kick off America’s 1976 Bicentennial celebration, and then did shows for Major League Baseball, which pushed the envelope, according to Paul.

For our nation’s birthday celebration, fireworks shows throughout the Inland Empire have that jaw-dropping Pyro touch. Most of the big shows throughout Southern California are the work of the pyrotechnic professionals at Pyro Spectaculars by Souza.

Shows average 18 minutes in length, with 20 minutes for the high-end editions and 15 minutes for the shorter shows. Painting the sky with color uses thousands of  pyrotechnic packages. The company points out that fireworks is a form of entertainment – it’s not just blowing things up. Teams of thousands of technicians are fanned out across the country on Independence Day waiting for dusk to send choreographed explosions of color bursting across the sky.

“We’ve developed products that are safe to use. We provide high-end quality stuff,” said Paul, who has a degree in electrical engineering, but fell in love with the family business.

“It’s quite rewarding,” he said.

These days, Paul said his 3-year-old son loves to watch fireworks shows and doesn’t seem to fear them at all. Could this be the beginning of the sixth generation? It’s all in the DNA.