The pyrotechnic spectacular is set to highlight classic American Cinema with a fan-favorite film score and dazzling display live from the world-famous Brooklyn Bridge and from four barges positioned on the lower East River along the shores of Pier 17 at the Seaport District In honor of the nation’s Armed Forces, “Macy’s Salutes Those Who Serve” with a special charitable campaign to support and empower veterans and military families from July 1 – July 18

American silver screen will set the scene for this year’s most spectacular Independence Day celebration, the 43rd Annual Macy’s 4th of July Fireworks®. The nation’s largest 4th of July event will make a magical return to the world-famous Brooklyn Bridge to present an incomparable display of light, sound, shape and color, this year honoring classic American Cinema. On Thursday, July 4th at approximately 9:20 p.m., millions of spectators lining the waterways near the lower East River and millions more on television nationwide will be captivated by the stunning display of patriotic firepower, as Macy’s Fireworks (NYSE:M) launch more than 70,000 shells and effects from the bridge and from four barges positioned along the shores of Pier 17 at the Seaport District.

“There is nothing more exciting on the 4th of July than gathering with friends and family to see a world-class fireworks spectacle, and this year’s Macy’s 4th of July Fireworks will deliver a jaw-dropping display that will be rumble in the imagination for years to come,” said Susan Tercero, executive producer of Macy’s 4th of July Fireworks. “With the iconic Brooklyn Bridge as our centerpiece and four barges lining the East River, we will launch an unprecedented barrage of color, light, sounds and shapes that will delight millions as they hum along to a patriotic and stirring musical score celebrating our Independence and landmark cinematic achievements.”

The 43rd edition of Macy’s Fireworks is conceived, designed and produced by Macy’s with Pyro Spectaculars by Souza. Perfectly orchestrated to synchronize to the musical score, the 25-minute display will feature a host of new shells and effects in 28 colors including crackling rain shells, patriotic chasing crossettes, howling wolves, screaming dragons, silver twisters, diamond screamers and a dramatic 1,600-foot waterfall. 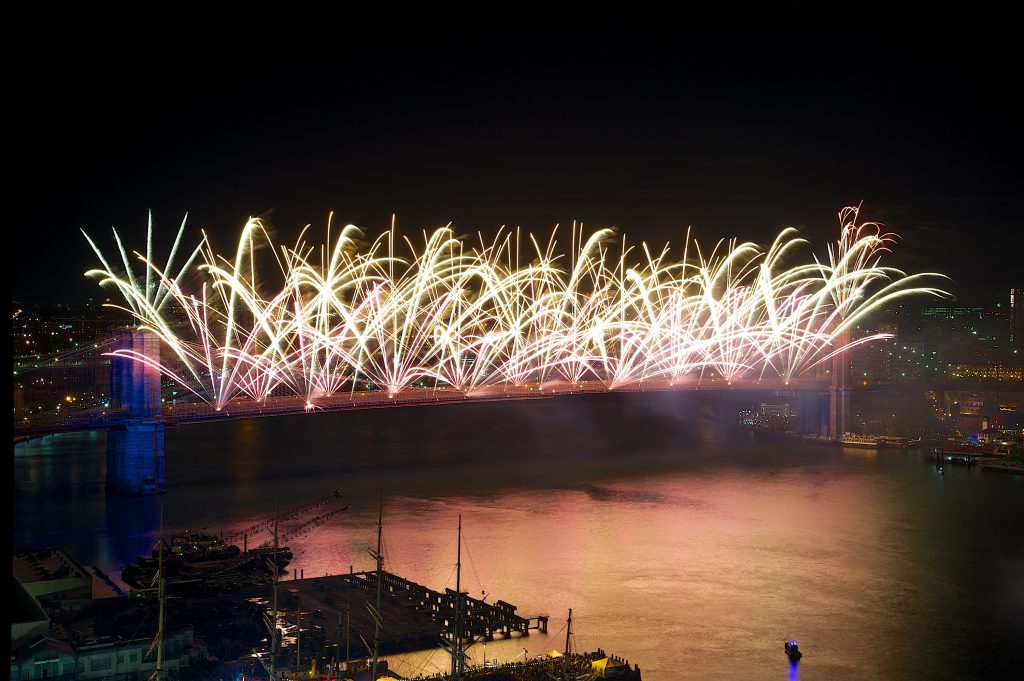 Since 1976, Macy’s Fireworks have grown in scale and artistry as they burst to life over many of New York City’s waterways and neighborhoods. Incorporating landmarks and celebratory milestones is a Macy’s Fireworks signature. Macy’s last showcased the Brooklyn Bridge when its structure served as the launch pad for key moments in the 2014 show. For this year’s presentation, Macy’s will fully integrate the bridge with an expanded design that will showcase approximately 25,000 shells and effects launching from the span. From the opening sequence representing the silver screen and featuring a dramatic silver hued pyrotechnic curtain unfurling from below the bridge to stunning multicolored waterfalls and chase scenes, a host of dazzling and intricate effects will be fired from more than 100 locations spanning the entire bridge, its towers and roadways. To create this out-of-this-world spectacle, six computer firing systems will control the bridge portion of the display requiring more than five miles of cabling and more than 110 custom designed props installed on the bridge to hold the pyrotechnics in position for the show.

The musical score is the basis for the fireworks choreography and this year it features patriotic classics such as “America the Beautiful” and “Stars & Stripes Forever,” along with world-famous instrumentals from classic American films. From John Williams’ famed title compositions for “Star Wars,” “Superman” and “E.T.” to Max Steiner’s “Casablanca Suite” and Alfred Newman’s “20th Century Fox Fanfare;” audiences will be humming along to the score as the fireworks paint the night sky in perfect synchronicity.

With MGM’s The Wizard of Oz turning 80 this year, Macy’s Fireworks pre-recorded score will also feature Oscar® and Grammy®Award winning artist Jennifer Hudson performing its most beloved song “Over the Rainbow.” The tribute will mark the show’s visual and emotional centerpiece. A host of rainbow-colored effects will be launched from the Brooklyn Bridge and barges including a fan, falling leaves, waterfall and a mile-wide rainbow accented golden crackling kamuro wall. The song will also serve as the backdrop for Macy’s famed Golden Mile. This signature of Macy’s Fireworks lights the skyline with a mesmerizing array of golden-hued effects for a mile across the river and from 800-feet in the air to the water’s edge. 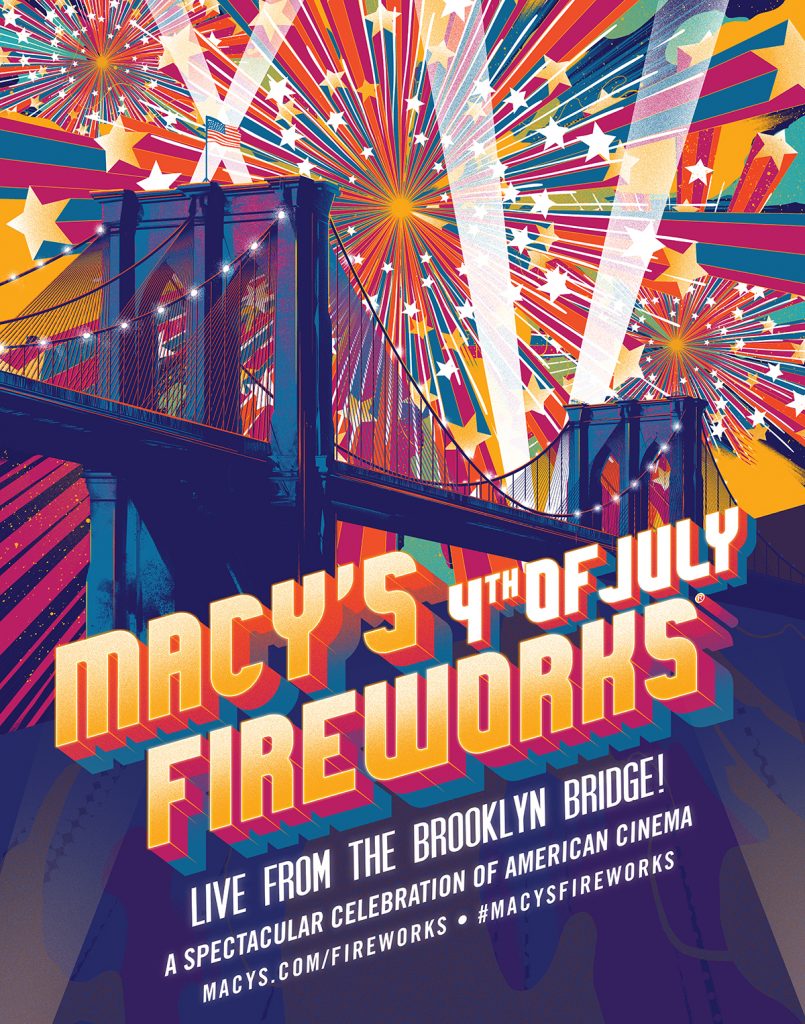 On July 4th, Macy’s Fireworks may be viewed from any area with an unobstructed view of the sky above the lower East River at or below the Brooklyn Bridge with four barges positioned between the Manhattan Heliport and Pier 17 at the Seaport District. Public viewing locations and dedicated entry points will be set up along elevated portions of the FDR Drive in lower Manhattan. Check macys.com/fireworks for the most up-to-date information including exact points of entry, viewing locations for persons with disabilities and for marine viewing details. Spectators lining the public viewing locations will also enjoy an NYPD helicopter flyover and an FDNY water boat show prior to the start of the display.

Macy’s glittering spectacle is made possible in part by GoBowling.com™, Green Giant®, New York Life, Pier 17 at The Seaport District and The Howard Hughes Corporation, SOUR PATCH KIDS® Candy, with the Official Countdown by Bulova, and is presented in partnership with the City of New York. Revelers lining viewing locations in New York City are encouraged to enjoy the full Macy’s Fireworks experience by tuning in to radio station 1010 WINS (via 1010 WINS-AM, or 1010 WINS on the Radio.com app) to hear the musical score to which the show is choreographed.

Spectators from coast-to-coast will also have a front row view of the pyro in the sky by tuning to NBC’s national broadcast of Macy’s 4th of July Fireworks Spectacular (8-10 p.m. ET/PT, 7-9 p.m. CT/MT, check local listings). The nation’s No. 1 Independence Day special will also feature performances from some of America’s top musical acts.

No Independence Day celebration would be complete without a special tribute to the men and women of the U.S. Armed Forces who work tirelessly to defend and protect our freedoms. In addition to the patriotic tribute during the Macy’s Fireworks display, this year, Macy’s and its customers nationwide will come together for a charitable round-up program to support active duty military, veterans and military families. During “Macy’s Salutes Those Who Serve” campaign, which kicks off Monday, July 1 and runs through Thursday, July 18, Macy’s shoppers are invited to round up their purchase amount to the nearest dollar (up to $.99) and donate the change. One hundred percent of the donations will benefit two veteran and military family focused organizations: Blue Star Families and Bunker Labs. These charities focus on a number of programs that support current and former members of the U.S. Armed Forces and their families, providing access to career development, caregiver support, entrepreneurship and business growth opportunities, among other services.

For more information on the 43rd Annual Macy’s 4th of July Fireworks, please visit www.macys.com/fireworks or call the Macy’s Fireworks Hotline at (212) 494-4495. In addition, follow and participate in the excitement on various social platforms via @macys and #MacysFireworks.