A Butterfly for Brooklyn, Large Scale Fireworks Performance Piece by Judy Chicago To Be Presented in Prospect Park April 26 by the Brooklyn Museum and the Prospect Park Alliance

Home
>
In the News
>
A Butterfly for Brooklyn, Large Scale Fireworks Performance Piece by Judy Chicago To Be Presented in Prospect Park April 26 by the Brooklyn Museum and the Prospect Park Alliance 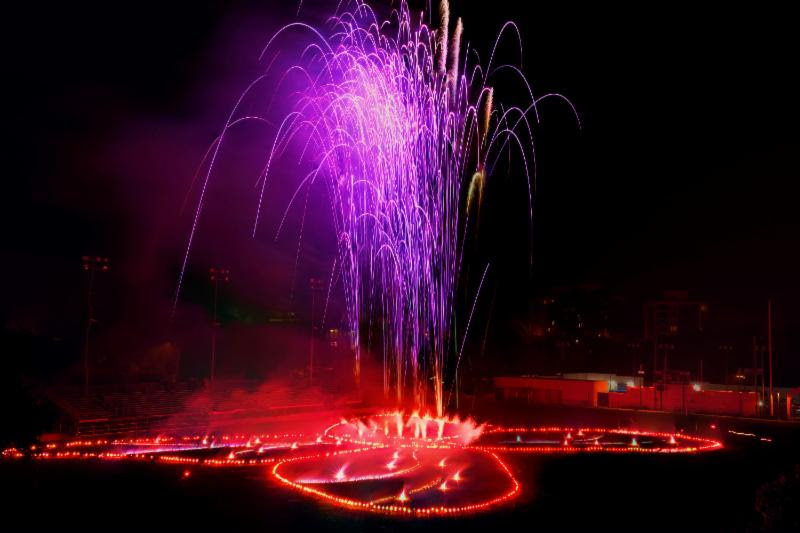 To celebrate her seventy-fifth birthday, artist Judy Chicago will create A Butterfly for Brooklyn, a monumental pyrotechnic performance piece drawing inspiration from her earliest explorations of feminist imagery, in Brooklyn’s Prospect Park on Saturday, April 26, at 7:30 p.m. The site-specific work, measuring approximately 200 feet wide by 180 feet high, will appear to levitate, swirl, and move. Presented by the Elizabeth A. Sackler Center for Feminist Art at the Brooklyn Museum in partnership with the Prospect Park Alliance, the project is an outdoor component of the exhibition Chicago in L. A.: Judy Chicago’s Early Work, 1962-74, on view in the Sackler Center at the Museum from April 4 through September 28. A Butterfly for Brooklyn will transform the imagery Chicago used most famously in her iconic installation, The Dinner Party, into a twenty-minute fusion of color and dazzling visual effects on the Long Meadow of Prospect Park.

Recent pyrotechnic performances by Judy Chicago were presented in California as a part of the J. Paul Getty Museum’s critically acclaimed 2011-12 curatorial initiative Pacific Standard Time. These recent fireworks pieces were inspired by an increasingly complex series of works called Atmospheres that Chicago created in various West Coast locales between 1968 and 1974. Working with a small team of friends, she transformed beaches, parks, forest, deserts, construction sites, and museums with whirling plumes of brilliant color. The series grew out of the artist’s ongoing research into color relationships during this period-one of the themes inher latest exhibition at the Brooklyn Museum.

As a part of a 1974 Oakland Museum project, Sculpture in the City, Judy Chicago produced A Butterfly for Oakland on the shores of Lake Merritt. This was the last environmental work she would complete for more than three decades. She states, “From the time I was a young artist in Los Angeles, I had big ideas. In addition to a prodigious production of large-scale painting and sculpture in the 1960s and 70s, I experimented with a variety of temporal materials. Using a range of fireworks and colored smokes, I did a series of Atmospheres whose goal was to ‘feminize’ the California landscape at a time when the L.A. art scene was singularly inhospitable to women. Unfortunately, my ambitions at that time were thwarted by a lack of financial support that prevented me from expanding the concept and scale of this work.”

Chicago in L.A.: Judy Chicago’s Early Work, 1963-74, the first survey on the East Coast of the artist’s early career, contextualizes Chicago’s work within the broader production of minimalism and conceptualism at the time, and continues the reappraisal of the artist’s importance as a pioneer in the California art scene. It brings together more than fifty-five objects, featuring Chicago’s minimalist sculpture alongside her Female Rejection Series, her large-scale paintings, and documentation of her environments and performances.

The Dinner Party, on permanent view at the Brooklyn Museum, was a gift to the Museum from the Elizabeth A. Sackler Foundation in 2003 and installed in the Elizabeth A. Sackler Center for Feminist Art when it first opened in March 2007. The installation honors the achievements of women over the millennia by featuring craft forms that until recently were not considered part of the fine arts. Each of the thirty-nine table settings, resting on elaborately embroidered runners, is unique to the woman whose life it honors and includes a hand-painted china plate, ceramic flatware and chalice, and a napkin with an embroidered gold edge.