Journey works its magic at the Bowl

Home
>
In the News
>
Journey works its magic at the Bowl 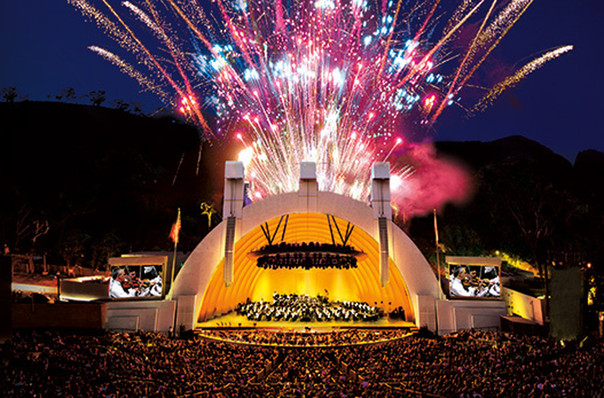 The premise sounds like something drafted in the notebook of a daydreaming teenager, the kind of thing that starts with, “You know what would be totally radical?”

It’s the stuff of fantasy; Journey is onstage at the Hollywood Bowl accompanied by a full orchestra. Guitarist Neal Schon is shredding on his custom green Paul Reed Smith, and just as he launches into the loudest part of “Anyway You Want It,” with the entire crowd singing along, fireworks start to illuminate the sky. They’re silent at first, but as they rise higher and creep over the crowd, thunderous booms accompany the white spirals, red flares and purple bursts that now spread to all four corners of the horizon.

Luckily, the notebook containing this rock fantasy belonged to the opening-night committee for the Hollywood Bowl, and on Saturday, Journey played with a full orchestra for the first time in a career that has spanned four decades.

Perhaps the group has never played with an orchestra before because every Journey song is an anthem already, and the five members of the band have had no difficulty filling arenas with their sound. Hollywood Bowl Orchestra conductor Tom Wilkins, a rock star himself in the eyes of Bowl regulars, understands that dynamic. That’s what made the pairing work; his orchestra was there to complement, not upstage.

On massively popular tracks like “Wheel in the Sky” and “Who’s Crying Now,” Wilkins directed his players to let the band work its well-honed magic, only really stepping out of the shadows during guitar solos. The format made for a cohesive performance.

Aside from the monster singles, the band went for lesser-known tracks that could be reinterpreted with an orchestra without leaving the audience feeling defrauded. Singer Arnel Pineda won the crowd over with his passion for his Philippines homeland on the song “City of Hope.” The band veered even further from the karaoke bar with the 1978 song “Winds of March.” As the seven huge LCD screens behind emanated a sinister red, the song’s harder prog-rock elements paired especially well with Wilkins’ conducting.

As the crescent moon set over the tree line, leaving a very visible Jupiter and Venus on the horizon, those onstage, including the 20-member choir from the Youth Orchestra LA, may have had the best view of the night. When a gentle breeze picked up during the calm opening chords of “Patiently,” it seemed as though Wilkins’ baton had some authority over nature.

The few moments in the band’s 2 1/2-hour set that lacked energy didn’t last. By the end of the restrained “Mother, Father,” the crowd was ready for fireworks. When the pyrotechnics began during “Anyway You Want It,” they were incredible. As the explosions multiplied in size and volume, all eyes were turned skyward. Drummer Omar Hakim, filling in at the last minute for Deen Castronovo, leaned across his kit to catch a glimpse from under the Bowl’s iconic arch.

The band left the stage after the fireworks and returned faster than you could say, “Yeah right, like they’re not going to play ‘Don’t Stop Believing.'” The Bowl audience didn’t need fireworks to get inspired this time, not for the best-selling song in the digital era. And they didn’t need sheet music to sing along to an anthem so catchy that it was still being sung long after the orchestra’s final bow.