Home
>
In the News
>
“It Begins with A Spark”: Global Superstar Usher Joins Macy’s 4th of July Fireworks

“It Begins with A Spark”: Global Superstar Usher Joins Macy’s in Curating the Concept, Music and Design of the 37th Annual Macy’s 4th of July Fireworks ® – The nation’s largest display of Independence Day firepower will feature 40,000 fireworks igniting the sky over the Hudson River in New York City

NEW YORK, May 09, 2013 (BUSINESS WIRE) — This 4th of July, the nation’s largest patriotic pyrotechnic display will illuminate the night sky over New York City as the 37th annual Macy’s 4th of July Fireworks(R) rumble to life. A spectacle like no other, this year’s show will feature a first-ever, one-of-a-kind collaboration with global superstar Usher, who has sold over 50 million records worldwide throughout his illustrious career and will join Macy’s in igniting sparks over the Hudson River 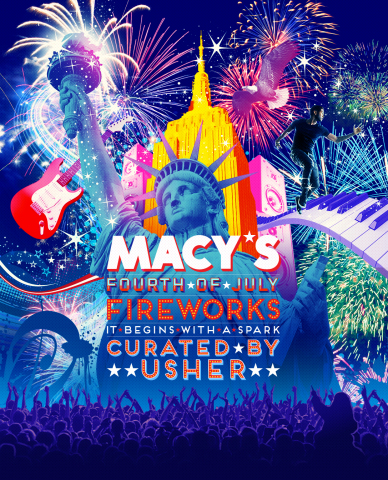 “This year Macy’s 4th of July Fireworks will be transformed into a giant party in the sky captivating audiences along the Hudson River and on television screens across the country,” Amy Kule, executive producer of Macy’s 4th of July Fireworks. “Since 1976, Macy’s Fireworks have grown in scale and artistry. With this first-ever collaboration with Usher, we are taking the show to the next level of entertainment spectacle, combining the very best of Macy’s Fireworks with Usher’s unparalleled artistic vision.”

“I’m really excited to add my flavor to the Macy’s 4th of July Fireworks, the largest show in America. As an artist, it’s important that I expand creatively into new areas. Working on the score and fireworks design has been a great experience that’s allowed me to share my voice in a new way,” commented Usher. “The 4th of July is a collective celebration of freedom and I hope that through the music and visuals, I’ve helped express the energy and passion of our nation. I can’t wait for the countdown; we’re getting ready to surprise the audience with the ultimate Independence Day party.”

For the first time in the history of the show, a superstar artist is collaborating with Macy’s creative and pyrotechnic teams. Lending his artistic inspiration and talent, eight-time Grammy(R) Award-winning artist Usher is curating the overall design of the show, entitled “It Begins with A Spark.” From the rousing musical selections to the spectacular Fireworks in the sky, Usher is putting his visionary stamp on the nation’s biggest Independence Day party.

Beginning with the score, Usher’s musical tastes are evident and reflect a melting pot of influences that span several decades of music. From current smash hits by artists like Rihanna, Kelly Clarkson, Avicii and Swedish House Mafia to classic artists like Jimi Hendrix, Frank Sinatra 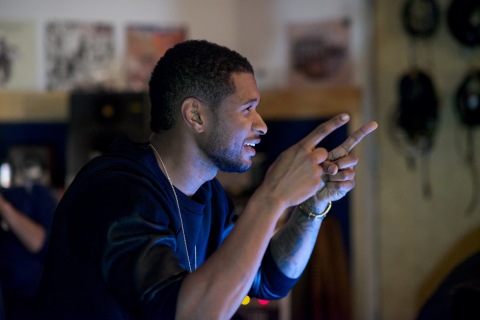 and Sam Cooke, the explosive evening will feature a taste of musical styles ranging from pop and soul to country and electronic dance music. With a selection of Usher’s top hits in the mix and Americana favorites such as “America the Beautiful,” “God Bless America” and “The Star-Spangled Banner” rounding out the presentation, the Fireworks will have a spectacular back beat as they paint the night sky.

Usher’s artistry also extends to the canvas in the sky. In collaboration with Macy’s Fireworks designers Gary and Jim Souza, Usher is providing visual design cues, inspiration and direction for the pyrotechnics that are choreographed to the score. Featuring never-before-seen effects, shapes and colors, the partnership is yielding a dazzling spectacle that will spark a wave of awe in audiences from coast-to-coast.

The 37th annual Macy’s 4th of July Fireworks will fire more than 40,000 pyrotechnic shells during a 26-minute synchronized display. SOUSA Fireworks is once again at the helm of the pyrotechnics which will be positioned on the Hudson River approximately between 24th and 40th Streets. With an average of 1,800 shells launched per minute, Macy’s Fireworks show provides the biggest booms in the nation.

Macy’s explosive spectacle is made possible in part by KitchenAid(R), Kool-Aid(R), Planters(R) and is presented in partnership with the City of New York. Revelers lining the Macy’s Fireworks viewing locations are encouraged to enjoy the full experience by tuning in to radio stations 1010 WINS-AM to hear the musical score to which the show is choreographed. Spectators from coast-to-coast will also have a front row view of the pyro in the sky by tuning to NBC’s national broadcast of “Macy’s 4th of July Fireworks Spectacular” beginning at 9 p.m. ET/PT, 8 p.m. CT/MT (check local listings). In addition to the pyrotechnics, the 4th of July’s most popular entertainment special will feature performances from the nation’s hottest musical acts.

For more information on the 37th annual Macy’s 4th of July Fireworks, please visit www.macys.com/fireworks or call the Macy’s Fireworks Hotline at (212) 494-4495. Information will be available as of June 4, 2013.

About Macy’s 4th of July Fireworks