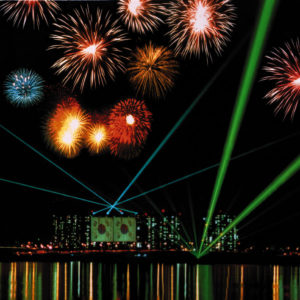 Pyro Spectaculars by Souza is proud to present, “Hooray for Hollywood,” our Sky Concert for the Seoul International Fireworks Competition set for this coming Saturday, September 30, 2017. This incredible show represents the United States in a spectacular fashion by featuring one of our countries greatest contribution to the entertainment world- Movies! And, all created directed and produced here in Hollywood, California.

The soundtrack is 16 minutes in length and will feature 15 songs ranging from the 20th Century Fox Fanfare to action-packed academy award winning films like Star Wars and Superman to romantic songs in Titanic and Frozen to dance and popular hits for the kid from the movies Trolls, Moana, and Minions.