Home
>
In the News
>
‘Feminist’ Fireworks To Erupt In Prospect Park 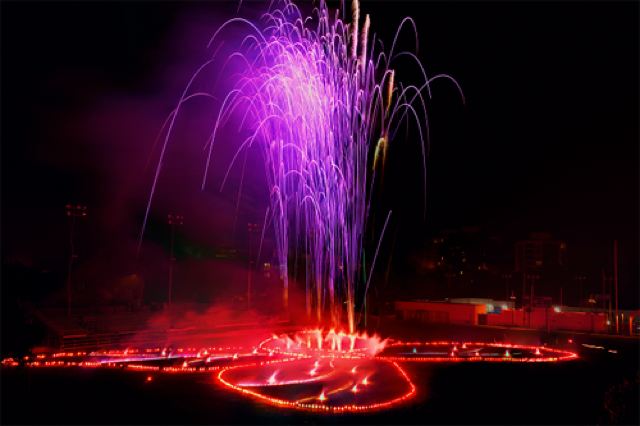 Fireworks come in all sorts of scintillating varieties—there are the normal ones, the rainy ones, the crackly ones. Sometimes they form simple images like lopsided smiley faces and off-kilter hearts, massive designs drawn by the hand of some invisible but vaguely stupid child. They don’t usually look like vaginas. (Don’t Google “vagina fireworks,” it won’t get you where you think it will.)

Sensing the lack of “feminist” fireworks displays, artist Judy Chicago—best known for her work “The Dinner Party,” in which plates are adorned with images of female genitalia—has gone ahead and created one, set to go off in Prospect Park’s Long Meadow on April 26. Chicago waffles on whether the images in her work are to be interpreted as vaginas or butterflies, but this is America and we will see a vagina where we want to, damn it, whether it’s an actual butterfly or a peculiarly shaped almond or a broken tire iron.

“The butterfly imagery is very basic to ‘The Dinner Party,’ so I kind of like that idea of that form getting out of the museum, escaping the confines of the plates and liberating itself into the air,” Chicago told DNAinfo.
The installation, called “A Butterfly for Brooklyn,” will consist of a 20-minute “fusion of color and dazzling visual effects” in the park’s Long Meadow. Chicago has a long history of working with pyrotechnics in her art, though with “hundreds and hundreds” of fireworks, 1,200 road flares and 1,600 feet of LED lights, she said this installation will be her most ambitious to date.

The show will start at 7:30 p.m. Check the Prospect Park Alliance for more information.