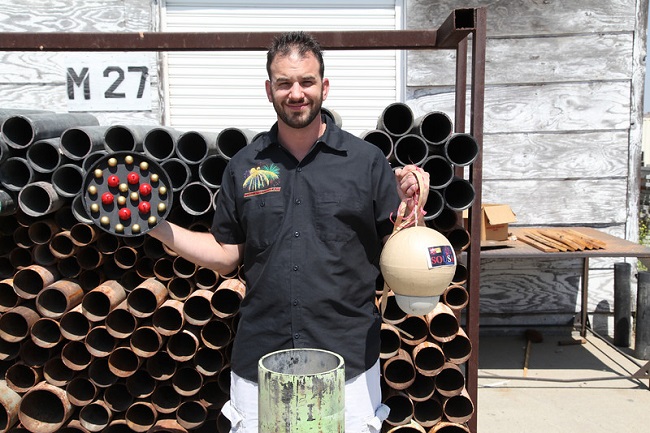 Jim Souza, great-grandson of Manuel de Sousa and president and CEO of Pyro Spectaculars by Souza based in Rialto, is a pioneer of the new era of fireworks productions. He was the first to put the shows to music, creating Pyro Musicals with patriotic music and American history. In 1976, he created the Sky Concert, using the art of fireworks with music broadcast over radio airwaves. These types of shows are now industry standards. Fireworks have been an American tradition since the beginning of our country’s history, he said. The first Independence Day show took place on July 4, 1777, in Philadelphia at the request of the founding fathers, Souza said. He went on to quote a newspaper report of the time, “At night there was a grand exhibition of fireworks, which began and concluded with 13 rockets on the commons.” More than 300 years later, we’re still celebrating. No longer the Inland Empire’s secret, Pyro Spectaculars is staging about 400 fireworks extravaganzas across the country to celebrate America’s heritage. Souza says he loves patriotism and celebrating America’s independence,

Early 1900s: Sousa and his family begin creating fireworks for the Portuguese community’s celebrations; he becomes known as Papagayo (meaning Parrot) for his colorful showmanship

1950s and ’60s: Grandson Bob rekindles the flame after interruption by the war and begins creating shows for county fairs and Fourth of July shows, eventually joining forces with a large consumer fireworks company

1989: Bob’s son, Jim, who took part in shows since he was 12, takes over Pyro Spectaculars

Since 1990: Under the leadership of Bob and Jim Souza, the company has developed into a powerhouse in the fireworks display industry and is now widely known as the “Fireworks Ambassadors to the World.”

Current: Jim Souza, his brother Gary Souza, and his daughter Nancy Souza Gilfillan along with her husband Ian Gilfillan carry on the fireworks tradition.

Future: Jim’s sons Paul and Christopher are well-established in the fireworks business nationally and internationally. Paul is charged with doing Americafest at the Rose Bowl with a 30-man crew; Christopher does Macy’s in New York with a 50-man crew; they have been joined by Nancy and Ian’s sons Matt and Kevin.