CNET Article – May the fireworks be with you 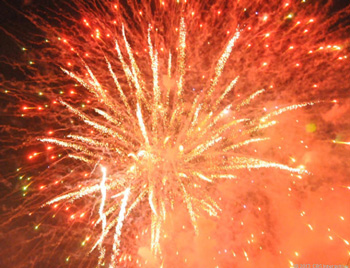 For the Pyro Spectacular team that put on a recent “Star Wars” themed fireworks show at the Oakland Coliseum, it’s a dangerous all-day job to put together a 15-minute show. CNET got the inside scoop.

OAKLAND, Calif.– Peering into the long black tubes, I’m startled when a stern voice behind me warns, “You want to treat them like a loaded gun. There might still be something unexploded inside.”
In other words, get my head the hell out of the way. This is good advice. I’ve come to the Oakland Coliseum, home of baseball’s Oakland A’s, to see a world-class pyrotechnics crew put together a major fireworks show, and the last thing I want is to ruin the experience by getting my head blown off.

Sheepishly, I move my head out of the line of fire of the black tubes, known as mortars, or guns, from which, hours from now, dozens and dozens of fireworks shells will streak into the night sky, exploding high overhead with ground-shaking blasts that will rock the thousands of people inside the stadium.

This is “Star Wars” fireworks night at the Coliseum. Inside, there’s people dressed as Princess Leia, and light sabers are everywhere, and on the field, stormtroopers are swarming at home plate, and a man in a perfect Boba Fett outfit throws out the first pitch. It’s an annual celebration put on by the A’s, and the playoffs-bound team has hired Pyro Spectaculars, one of the country’s largest pyrotechnics companies, to put on the show.
Here’s how it works. The A’s put together a soundtrack with an introduction and 15 minutes of “Star Wars” music and gave it to Pyro Spectaculars. Then, producer Jeff Thomas designed the show, ensuring that each beat of the music is accompanied by an explosion of fire and sound and color. Up in the stadium’s sound booth, Thomas and David Don, the A’s senior director of multimedia services, ran through a rehearsal, making certain the audio coming from Thomas’ computer is synched up to the ballpark’s sound system.

Back behind the stadium, in the gritty Lot K, a huge white truck sporting temporary placards that read “Explosives” on the side and the grille came to a stop. A Pyro Spectaculars crew greeted the truck, and, pulling open the rear door of the truck, they jumped into action, forming a bucket brigade of sorts and quickly carrying rack after rack of black HDPE — high-density polyethylene — mortars to designated spots in the concrete lot.

With hours of work ahead, the mood was light. Everyone’s cracking jokes — “let’s take the crazy train to crazy town because it’s crazy,” someone shouts. And why not? This crew is as pro as it gets. Though a fireworks show has to be run by a licensed pyro operator, the only legal requirement to help out is that you’re over 18 and not a felon. But this bunch was packed with licensed operators. These are the guys you call when you’re putting on the jaw-dropping fireworks show celebrating the 75th anniversary of the Golden Gate Bridge.
Part of being pro beings they’re patient. And that’s good. They know that just because a fireworks show lasts for 15 fast-paced minutes doesn’t mean it comes together anywhere near that quickly.
Cue sheet

When Thomas was choreographing the show, he assigned a specific fireworks shell to each beat of the “Star Wars” music. And the design called for each shell to fire from a specific spot. Now it was the crew’s job to lay out the field of pyro racks according to that plan. 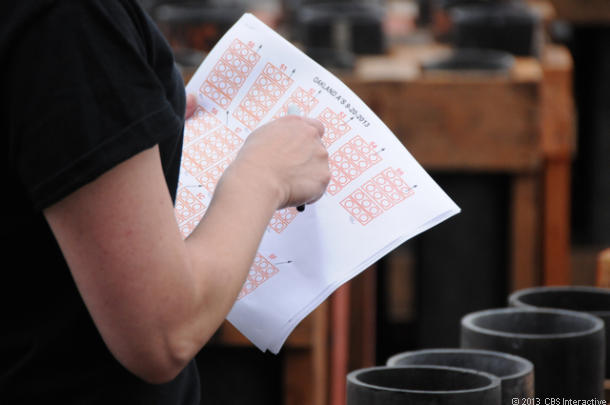 A professional pyro show is a computerized symphony. Each mortar has an individual address, which is assigned by attaching wires from the shell to an electronic module mounted on the rack. A shell with “415” written on it is placed in the fifth mortar in rack 41, which has a module with one round dial turned to 4, and another set to 1. The shell’s wiring is then plugged into the module’s fifth slot. When Thomas’ sequence calls for shell 415 to be fired, the computerized field controller that everything is connected to sends a signal and off into the sky goes the firework. Boom!

That explained the cue sheets several crew members are carrying around, which had Thomas’ plan laid out visually. The racks of mortars that came off the truck started out identical, but they had to be organized according to Thomas’ design. Generally, they were built into banks of six racks. Some were put together with all six pointing straight up, while others were angled slightly to one side or another. And still others had three pointing one way, and three the other. The idea was for the fireworks to be fired in exactly the order and direction Thomas wants. 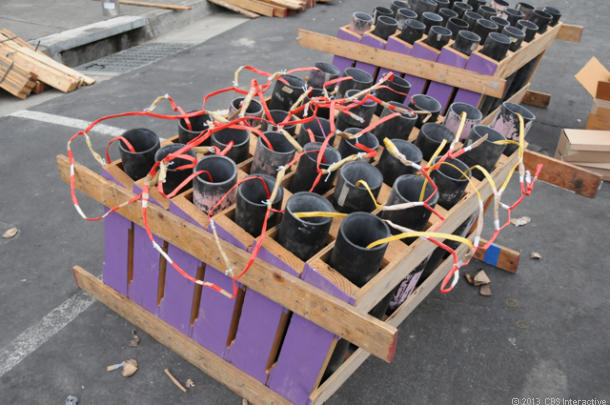 Now the crew had to slowly and carefully load each of the shells, with each being gently placed inside its mortar, its wiring threaded through a small hole in the HDPE tube and tied in such a way that later, when tearing everything down, crew members could easily pull them back out.

Inside the mortars, the fireworks — two cardboard half shells wrapped tightly in tissue paper and filled with layers of flammable rice hulls, gunpowder, and various forms of small explosive compounds — were meant to sit and wait until an electronic charge sent from the controller ignited what’s called an electric match, or e-match. That lights a gunpowder charge, which then fills the tube with gas and propels the shell out of the mortar and into the sky.
First, though, the team had to run what’s known as a continuity test. The idea was to make sure that all the shells were wired properly, and that each cue in Thomas’ program had an associated shell. By running through the test, the team could tell if any shell didn’t get connected, or if any of the modules were improperly addressed.

Tonight, the continuity test required three full run-throughs, as there was an unusually high number of misreporting racks. But finally, everything was locked down, the field controller was armed, and it was go time.
Of course, the fireworks couldn’t start until the game ended. And though the A’s were winning handily, I joked to two crew members that the game could go into extra innings, forcing them to wait late into the night. Instantly, both yelled, “Don’t say that!” It turns out that pyro crews, like baseball players, have superstitions. And I just broke one. 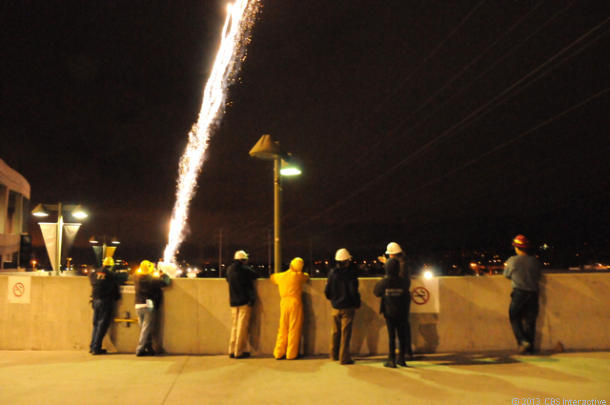 Thankfully, though, the game lasted just nine innings, letting me off the hook. The fans filled the field to watch the show, and with the crew cleared out of the now dangerous fireworks zone, it was time for them to be spectators.
The “Star Wars” music began to play and the first firework shot into the air. Over the next 15 minutes, the shells launched, one after another, just as planned. The flashes from the mortars looked like cannon fire, and overhead, the explosions were huge and dramatic, the sound echoing loudly off the back of the stadium.

Behind the Oakland Coliseum is a bridge connecting it to the nearest rapid transit station. Normally, after a game, thousands of people rush to cross the bridge to catch the train, but this time, they had to wait until the fireworks were done. Even then, they had to wait for the pyro crew to make sure no unexploded shells had landed on the bridge.

Certain that everything was fine, the crew began to walk down the ramp toward Lot K, where they faced an hour cleaning up the messy aftermath of a full-scale pyro spectacular. At the bottom of the ramp more than a thousand people were eager to be allowed to head up to their trains. But as the crew neared the bottom, each member wearing a hard hat, the crowd saw them approaching. And without warning, a huge cheer went up.

Click Here to read the orginial article on CNET.