Chicago is Everywhere - Pyro Spectaculars by Souza
Skip to content

Home
>
In the News
>
Chicago is Everywhere 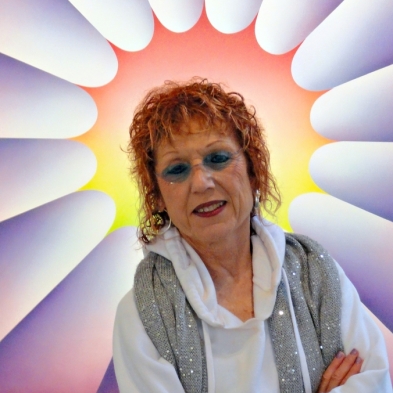 We arrived at Judy Chicago’s hotel room expecting to be greeted by a handler or assistant, but were surprised to find that the soon-to-be 75 year-old artist answered the door herself. She was wearing a sweatshirt from Pyro Spectaculars, the fireworks engineers working with her on her upcoming large-scale performance piece in Prospect Park, A Butterfly for Brooklyn. The sweatshirt was the same sort of baggy, pastel memento worn by women of her age to commemorate a trip to Las Vegas or Fort Lauderdale—but instead, this one had a small embroidery of fireworks over the heart.

A Butterfly for Brooklyn is the capstone event of what Chicago refers to as her year-long “national retrospective.” This year, she has shows at the Mana Contemporary, Harvard’s Schlesinger Library, the Palmer Museum in Pennsylvania, the Oakland Museum of California, and several others around the country. “Chicago in L.A.,” which just opened at the Brooklyn Museum, is one of the larger and more exciting ones, as it sheds light on Chicago’s first 10 years of artistic practice in Los Angeles in the 1960s. It was a time and place where women in art were not taken seriously, and, as Chicago explained, a body of work that her magnum opus The Dinner Party overshadowed.

JUDY CHICAGO: Loved that story with Yoko Ono in Interview. It was great.

TODD PLUMMER: She is everything. I think her staying power above all else is really remarkable.

CHICAGO: I really relate to it.

PLUMMER: Do you know her at all?

CHICAGO: Never. I know. But I really relate to her. We had similar challenges, actually; for different reasons, though. She was an object of great hostility. And I have been, too, so I really admire her persistence. Anyways.

PLUMMER: OK, let’s start. I was doing some research… and you and I have the same birthday. July 20.

CHICAGO: On the cusp of Leo!

PLUMMER: You know, I’ve never met anyone else with my birthday.

CHICAGO: Neither have I. That is so wild.

PLUMMER: I guess it just means that we were supposed to meet. Tell me, the “Chicago in L.A.” exhibition just opened at the Brooklyn Museum. What are some of your favorite highlights from it?

CHICAGO: First of all, Catherine Morris, the curator, did a fantastic job of putting together the story of my first decade of practice. She told it visually, which is of course the best way to tell an artist’s story. I was very happy with the scale of the show. There was a lot of work a lot of people didn’t know about, and even if they did know, they didn’t realize how large it was. I was thrilled—she went through hundreds of images of my fireworks pieces from 1968 to 1974, which nobody knew anything about here in New York. She did a wonderful job of assembling an image show of them for a digital screen in the show. She selected 170 images from thousands. I’m really, really glad for that work to be highlighted, because for such a long time nobody knew anything about it. One of my car hoods is in the show, too, and there are only four, and another one owned by Moderna Museet in Stockholm was in the “Pacific Standard Time” show at the Getty, and at the opening I ran into John Baldessari and Ed Ruscha, who I’ve known for years. They said to me, “Oh Judy, we just saw Richard Prince, and we asked him if he knew your car hoods, and he said, ‘No,’ and we said, ‘Eat your heart out!'” I loved that story because there are all of these things I did earlier than other people did them, like car hoods before Richard Prince did his own. It’s taken a really long time but suddenly it’s becoming visible.

PLUMMER: Why do you think your work was less visible when you were doing it?

CHICAGO: There’s no question as to why. The L.A. art scene in the 1960s was unbelievably macho. I was the only woman taken seriously, and even then I was kind of marginal. There is even ongoing resistance today. I have a painting called Big Blue Pink that was in the Getty “Pacific Standard Time” show, and one of the male artists of my generation objected to its inclusion even now because of its sensual and emotive content. He didn’t think it belonged then, just like many didn’t think it belonged in the ’60s.

CHICAGO: It’s hard to imagine, right? [The ’60s in L.A.] were a time when people felt completely free to say, “You can’t be a woman in art.”

PLUMMER: Is there anything not in “Chicago in L.A.” you wish had been?

CHICAGO: The Brooklyn show was a challenge from certain points of view. One issue was that I made a huge body of large-scale sculpture in the ‘60s, and there are only a few of those left, because it cost a huge amount of money to store them, and they weren’t getting anywhere, so I destroyed them, so those are only represented by photographs. The other thing is that I counted up my “real estate”—my work is occupying across the country, and it’s something like 30 thousand square feet, and it still doesn’t cover my whole career. I’m thrilled about the shows at the Mana Contemporary and the Brooklyn Museum, this sort of national retrospective, but there isn’t a major museum in the world today that would accord enough space to a woman artist to have a major museum retrospective. I’m glad that New Yorkers are getting to see a part of my production, but it’s still only a part.

PLUMMER: What does it mean to show your L.A. work in New York?

CHICAGO: Even though I feel grateful for the amount of attention The Dinner Party brought me, it also blocked out the rest of my work. A critic recently said that seeing “Chicago in L.A.,” then seeing The Dinner Party again, made them understand that it didn’t come from nowhere, that it reflected all the work I had done in my first decade—work on color, on surface, learning to paint china, so on. It makes clear how my first decade of practice laid the groundwork for The Dinner Party. Historicizing it this way gives a better context to understand The Dinner Party as a work of art.

PLUMMER: What’s the biggest difference for women in art between your early career and today?

CHICAGO: Young women and women of color can be themselves in ways that weren’t even possible when I started. On the other hand, the changes in consciousness that have taken place have not sufficiently translated into institutional change. The paths into art history are: solo shows and major exhibitions, collections in museums, and monographs. In the ’70s, only 1.5 percent of monographs were devoted to women artists. Today, it’s only 2.7 percent. That is not sufficient change. Major museum collections still only represent women in 3 to 5 percent. There has not yet been sufficient institutional change.

PLUMMER: What interests you in fireworks performance?

CHICAGO: Looking back to when I started in 1968 to 1974, I can see that the color I used was contained in forms. I was getting ready at that point to make a really radical change in my art practice, and when I look at it now, I can see that when I released the color into the atmosphere with my fireworks, it was a precursor to wanting to liberate my impulses from the containment of minimal form. That’s really clear to me now. At the time I was doing them, I was talking about feminizing a decidedly macho atmosphere. I was studying to be a pyrotechnician, and back then you had to apprentice yourself to a fireworks company to learn how that’s done, and I stopped doing fireworks for two reasons at that time. First, I wanted to get bigger and I couldn’t find the support, and second, the guy who owned the company was sexually harassing me. So that was the only time in my life I was deterred from my ambitions. The last fireworks piece I did then was A Butterfly for Oakland in 1974. Forty years later, I actually picked up where I left off with A Butterfly for Pomona at Pomona College—it was on a football field, it was just perfect!—but even that was a sort of practice. I’ve waited for 40 years to work at this level of complexity for A Butterfly for Brooklyn. It’s thrilling to be able to show it in New York, thrilling to realize the level of ambition I had when I was first doing fireworks, thrilling.

PLUMMER: What is the most difficult part of making a large-scale fireworks piece?

CHICAGO: Raising funding is one stumbling block. The people who are funding A Butterfly for Brooklyn, one of the reasons they are doing this is to support a woman working at the same level of ambition as male artists. We’ve been working on this for months and months. You can not imagine how complicated it has been. Doing tests on all the different techniques, creating a timing schedule about how long the pauses should be, at what point the smoke will clear, when we can start the next round.

PLUMMER: Will you be out there lighting the fireworks?

CHICAGO: Oh, no! In the old days, I would buy fireworks with my friends and go do them on the beach, or on Mount Baldy in L.A. Now you have to get all these permits for everything! It would be inconceivable for me to go to Prospect Park and light a bunch of fireworks! Also the complexity of this piece is way beyond what I was doing myself. [laughs] Another big change is that there were no women pyrotechnicians when I was working in L.A. When I got to the point of doing the first butterfly, there were no female technicians. Now, the technician in charge of A Butterfly for Brooklyn has been very insistent on bringing a whole group of female pyrotechnicians to come watch it.

PLUMMER: Why a butterfly?

CHICAGO: The imagery and the place. When you go to see “Chicago in L.A.,” you’ll see how in my early imagery there is a butterfly image, then I suppressed it, then it sort of came back as I began to make female-centered imagery. I stopped doing fireworks just as I started The Dinner Party. And I also just thought it would be nice!

PLUMMER: What is the greatest single lesson you have learned through your career in art?

CHICAGO: Don’t give up. You’ll see one of the car hoods in the Brooklyn show, and it comes from some images I did in graduate school that my professors absolutely hated, so I destroyed them. But when we were preparing for “Pacific Standard Time,” I looked at all of this work I had put into storage, and I discovered that I had started three other car hoods, and I decided to finish them and I transferred the images from these paintings I had destroyed. Here I am 40 years later, having finished the paintings, and I think: there was never anything wrong with that imagery. It’s really important to trust your impulses as an artist no matter what anybody else says.

“CHICAGO IN LA” IS ON VIEW AT THE BROOKLYN MUSEUM THROUGH SEPTEMBER 28.  A BUTTERFLY FOR BROOKLYN LIGHTS UP PROSPECT PARK ON APRIL 26.  SEVERAL OTHER EXHIBITIONS AND EVENTS ARE PLANNED NATIONALLY THROUGHOUT 2014; FOR MORE INFORMATION ON THEM, PLEASE VISIT CHICAGO’S WEBSITE.