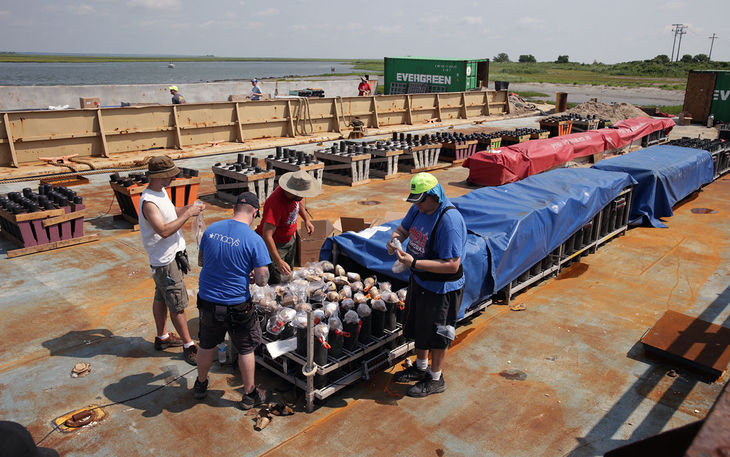 Question: What does Atlantic City call 10,000 fireworks shells shot off from two barges in the ocean and closely choreographed to a 15-minute soundtrack that culminates in a rousing rendition of John Philip Sousa’s “Stars and Stripes Forever?”

That’s because those 10,000 shells are just what the Atlantic City Alliance is having shot off from the ocean side of the city at 9:30 p.m. Friday — July 3 — to welcome the weekend crowds to town.
The alliance will shoot off that same barrage of 10,000 blasts, and back it up with the same music, at the same time Saturday night, July 4. Only this time, the center of the action — and the noise — will move across the island to an empty lot by the bay in the city’s Marina District.

Christopher Souza, a fifth-generation member of the family that runs California-based Pyro Spectaculars by Souza, says it will take a crew of 16 experienced technicians about 4½ days to put the two shows together, shell by shell, grid by grid and wire by wire. And it takes miles of wire to control and synchronize a show with that many shells.

Souza’s crew has been working on the barges, which are anchored on Absecon Inlet across from the marina, since Monday. And they won’t be finished assembling Friday night’s show until Friday, said Souza, whose experience in the family business includes years of being the technical director of Macy’s July 4th fireworks in New York.

He’s been the “big cheese” in Atlantic City for two summers, and he says the crew here includes a variety of professions — everything from doctors to drywall hangers to electricians to sound engineers — all drawn by a love of working with fireworks.

“Most of these technicians bless me by taking their vacation to come out here and work,” Souza said, because to them, pyrotechnics are “a passion, not just a job. … It’s really like a hobby.”
Plus July 4th is basically to the fireworks business what Christmas is to shopping in this country. Souza says Pyro Spectaculars is scheduled to put on about 400 shows this holiday weekend, “from sea to shining sea” — and then across some more sea and into Hawaii.

And fireworks can still draw a crowd in lots of places. The alliance’s Melanie Sole said there’s a range of very unofficial estimates for how many people one of Atlantic City’s full-blast fireworks shows can bring out — “I’ve heard anywhere from 150,000 to 250,000,” Sole said. “I think it depends on the weather and the day of the week, that kind of thing.”
The casino-funded alliance is “bound by a confidentiality agreement and not allowed to disclose the fees” it’s paying for the two shows, Sole said. But she added that the two barges, both locally owned, are “among our largest costs, after fireworks.”

Fireworks can make a boom for other local businesses, too. Jeff George, captain and owner of Atlantic City Cruises, was happy to hear about the two nights of fireworks going off over the city this year, because fireworks sell out his tour boat every year.

“Those trips will go out full,” George predicted Wednesday, very confidently — although he quickly added that as of right then, some tickets were still available for the Fireworks Cruise scheduled to leave Gardner’s Basin at 8:30 p.m. Friday and Saturday.

And unlike many other summers, fireworks won’t end in Atlantic City this year when the smoke finally clears from the July 4th show.
Tropicana Casino and Resort plans to host free fireworks, shot off the beach every Saturday night from July 11 through Sept. 4, the casino announced recently. Those weekly 10 minutes of fireworks will follow a pair of shows the Trop held Memorial Day weekend, and they’re designed to promote the same project — the casino’s new “Multimedia Sound & Light Show,” which now plays nightly on the Boardwalk, every half-hour from 8:30 to 11 p.m.

Steve Callender, Tropicana’s general manager, said the public response to the casino’s May fireworks was “huge and positive” — as it has to the ongoing outdoor show of sounds and light.
And speaking of huge, the mortars that Pyro Spectaculars is loading up for this weekend range up to 10 inches in diameter — and are packed with enough gunpowder to shoot almost-basketball-sized shells up to 800 feet in the air, Souza said. But other, smaller shells go up and make their booms and burst their colors just 100 or so feet above the ground.

“We like to layer the show,” he said, adding that in his lifetime of experience, the perfect viewing distance for fireworks is about a quarter-mile away from the shooting site.
And even though he has the firepower to send his fireworks 800 feet into the sky, Saturday’s second round of 10,000 shells — the ones shot off on land near the Marina District casinos — won’t go quite that high.
That’s because much of the crowd tends to be closer on a land-based show, and it gets uncomfortable for people who are that close to follow fireworks bursting that high. Souza likes to create lots of oohs and ahhs at his shows, but he’d hate to be responsible for a quarter-million cases of neck strain — especially on his favorite national holiday.