Home
>
In the News
>
RIVERSIDE: A Lum-Inn-escent DEBUT 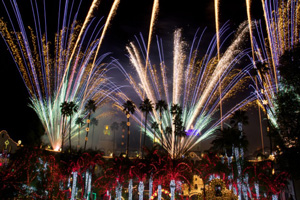 A sea of spectators – as many as 60,000, according to estimates by event officials – roared its approval as fireworks erupted from the roof of the Mission Inn Hotel and Spa in downtown Riverside on Friday night and applauded the energizing of the 4 million LED lights festooning the historic landmark.

The cheers – accompanied by the amply amplified Christmas music – reverberated through the streets surrounding the hotel as the throng celebrated the kickoff of the Festival of Lights’ 22nd season.

For the crowd, it was actually a do-over. The hotel’s light bulbs were turned on briefly about 5 p.m., half an hour before the scheduled start of the event in an apparent test of the system. “Oohs” and “ahhs” burst from the crowd and more than 400 animated pandas, elves, angels and carolers mounted in nooks and crannies around the hotel sprang to life – only to be shut down moments later.

It was the only hitch in what turned out to be a spectacular show, featuring a performance by the Riverside City College marching band and an announcement that the band had been invited to perform at the Tournament of Roses Parade in Pasadena on Jan. 1.

“It was phenomenal,” Larissa Chavez said of the event, which is one of the city’s biggest tourism draws. “The lights are beautiful.”

Valerie Salazar of Riverside watched the lighting ceremony for her third year.

“I thought it was awesome,” she said. “The fireworks were great. The band was awesome.”

The one difference, she said, was that she thought the ceremony was more crowded. But the fireworks show, which lasted nearly 15 minutes, was even better than prior years, Salazar insisted.

As the lights came on and the fireworks went off, the crowd in the streets seemed to be responding with a light show of its own. Smartphone lights and flashes flickered as visitors held up electronic devices to snap selfies and photos of the hotel.

The streets, especially in front of the inn, were jammed so tight that the crowd could not move. A handful of spectators watched from the roof of a parking structure a block away and photographers perched atop surrounding buildings.

Gloria Muro, 62, of Whittier said she was awestruck by the event.

She came to town Friday to visit a tamale factory and was handed a brochure touting the Festival of Lights when she was turned away from the factory. And, in a nice bit of out-of-towner luck, she wound up with a choice viewing spot in front of the hotel.

Margie Haupt, arts and cultural affairs manager for the city of Riverside, said 12 months of planning went into the logistics of shutting down seven streets in a three-block radius of ground zero, at Mission Inn Avenue and Orange Street, and arranging everything from the positioning of firefighters and police to a host of vendors.

Riverside came up with something new this year, she said: souvenir T-shirts being sold on Mission Inn Avenue for $20.

In the middle of it all was Mission Inn owner Duane Roberts, who mounted a platform and thanked the crowd for turning out.

The festival “increases Riverside’s influence,” he said, “but more than all, everybody is able to enjoy it. This is Disneyland without to having pay (for) a ticket.”

The show goes on nightly through Jan. 6, with live carolers making the rounds of the inn Thursdays to Sundays and the ice rink open through Jan. 3. Reindeer will be on site beginning today and will be housed in a pen on Main Street at what Mission Inn sales director Shannon Walters described as a “looking, rather than petting, zoo.”

Santa will pose for photographs starting Sunday through Christmas Eve.